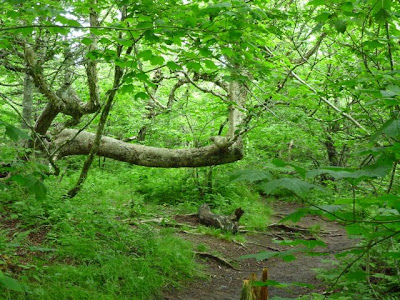 Walking the dog along the beach I came to a couple of kayakers coming out of the fog. They were paddling just outside of the breakers, I suppose thinking by being in close to the shore they wouldn't get lost. Certainly it was the only way they were going to see anything other than their front decks! 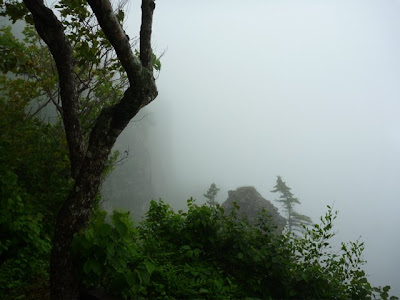 A couple of weeks ago, on another foggy day, I chose to go hiking out along Cape Split in Nova Scotia. I was hoping to see the tidal race that forms out there. Being at the mouth of the Minas Basin off the Bay of Fundy, it is said to be quite the sight once it gets moving at mid-tide. The trail made for good going although it was a bit wet and muddy. Given it had been raining off and on for the previous month I wasn't too surprised. 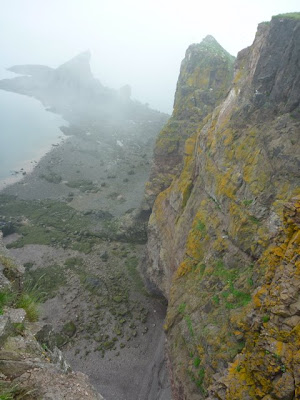 Once at the headland, the cliffs opened up as the trees gave over to open grassy patches. There was no way I could see a way down the vertical drop to the water, but the fog made for some dramatic views. Gulls swirled about squawking. My luck, the tide was fully out. The water slack and nearly still. The 90 minute hike had not turned out to be quite what I had anticipated. What can you expect from a fresh-water paddler who forgets to check the tide tables before embarking on a hike in the fog? Had I known the water would be so quiet on my arrival, I might have tried paddling out in half the time. Still, in the fog, what would I have seen but the foggy shoreline, just like the paddlers I came across on my beach walk?
Posted by Michael at 9:45 AM

Nice view! But I'm afraid of heights. How high up are you?