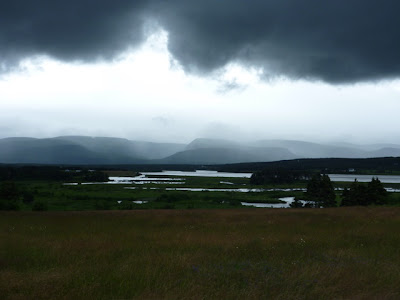 There are two ferry ports of call when coming to Newfoundland from Nova Scotia: Argentia in the east and Port aux Basques in the west. A few miles up the highway from the latter is the Codroy Valley. This brackish water river estuary has a reputation for being a good place to see birds, so a couple of us decided to check it out while I waited for the ferry home.

The day was overcast with 110 kph winds predicted for the 'wreckhouse', as the section of the Trans Canada Highway road in this area is known before it leads northward to Corner Brook. We decided to get out early so we weren't caught on the water in those winds. As you can tell from the photo, the weather was, well... unsettled, might be one way of putting it! 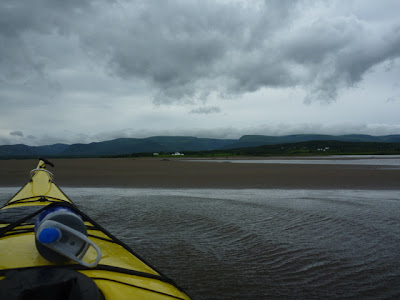 The estuary was mostly shallow and we found our kayak bottoms on mud banks regularly. After a couple of hours of poking around without seeing any birds more exciting than a pair of black backed gulls and some Canada geese, we passed under the first bridge. Actually, we were pushed under the bridge by the rising winds and the ebbing tide.

It was clearly time to turn around and head back to the put-in. By this time we knew the river well enough that we could paddle in deep water most of the way and avoid the shallows. The blasts of wind in our faces made us aware that our decision to turn around had been wise. As I write this several hours later, the wind is really howling down the river. Word is, the ferry will be several hours delayed on account of winds...
Posted by Michael at 2:47 PM

Please note that the Japanese language comments which have been appearing here are links to offensive sites. I don't recommend them!