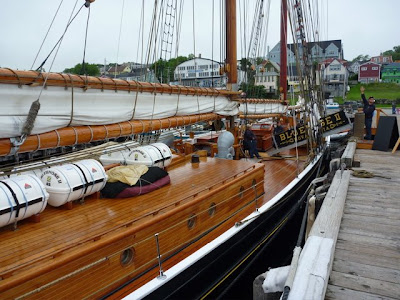 If you've ever spent a dime in Canada, then you'll know the Bluenose, the ship on the back. She was a Grand Banks schooner that made a reputation for herself racing similar boats along the northeastern seaboard years ago. In the photo above is her replica, Bluenose II, built in the same shipyard as the original. I suspect the first Bluenose didn't have the gleaming woodwork as this lady does, but it's good to know the ship on the dime is still sailing! 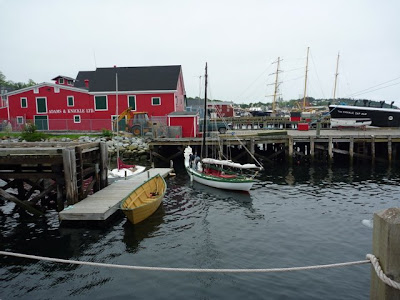 Right alongside the Bluenose II, two other period boats are also alive as well. The yellow dory is still used for many jobs, not the least of which is entering in the International Dory Races held each summer in Glouchester, Mass in the USA, which I referred to a few weeks ago. The white double-ender just came in to tie-up, her 'make n'break' motor making a very distinctive sound as she putted through the moored boats in the harbour. 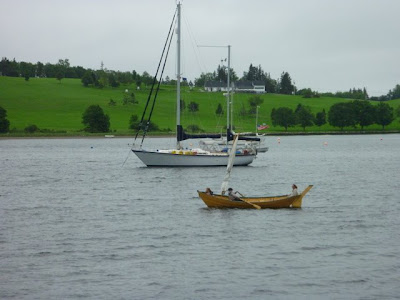 These young people were out getting some dory rowing practice in while their 'coaches', quite a few of them actually, shouted various words of encouragement from the end of the wharf. I'm not sure if the coaching was all that useful, but the young ones took it all in stride nonetheless.

Lunenburg's a great place to visit, but paddling a modern, glass kayak seemed a little out of place amide all the history!
Posted by Michael at 8:02 PM