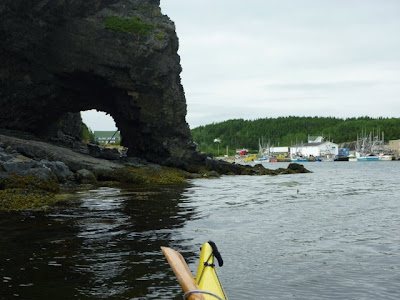 On the Eastport Peninsula in Newfoundland, sticking out into Bonavista Bay, there's a tiny place called Happy Adventure. I couldn't resist having a look around, so I went for a paddle. I launched just below the tea room called the Bosun's Whistle. From there I headed around a little island and thence into Newman Sound. The sound was being well mixed up by an easterly breeze, so I headed upwind towards Sandy Cove. As I passed the cove where the fish plant is situated, I noticed this nice little sea arch. Probably too far out of the water to paddle through except on the highest tides, it is no doubt easily reached from the land. 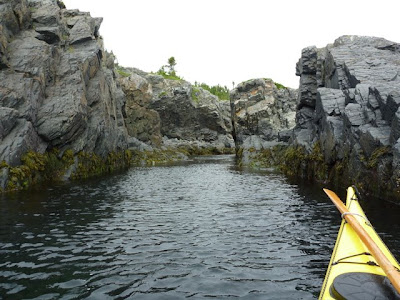 Continuing along the shore, I saw an entry way opening in the rocks ahead. I watched for a while and while a bit tight, I thought I'd be able to slip inside and let the slight swell pull me through. I got most of the way in and was wondering how many scratches the hull would receive as I made the final twist back out the exit, when suddenly water began pouring into the crack and I was shot out the way I'd come in. It was a bit disconcerting to be ejected so unceremoniously like that, but the hull was no doubt much the better for it! 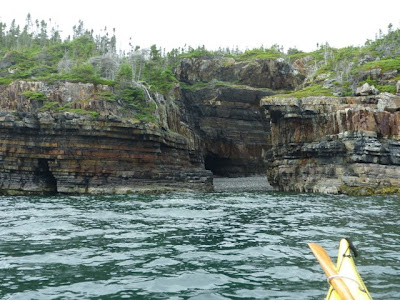 I paddled on into the easterly breeze thinking I might get to Sandy Cove only a short distance along. As usual, the never ending geology of Newfoundland kept drawing me to shore in spite of the rebounding wave action I found there. I was fascinated by this particular section where layered rocks were overlain by some igneous ones. The result was the fractured sedimentary layers were eaten away over time leaving a series of widening channels and collapsed caves. I would love to return to explore more on a calmer day. Soon after leaving that area, I sensed the tide turning against the wind, so reluctantly I swung the bow around and began the surf ride back to Happy Adventure. Once there,and in my own way, I understood the naming of the little community! I loaded up the car and entered the Bosun's Whistle for some tea and cake. Highly recommended!
Posted by Michael at 4:35 PM