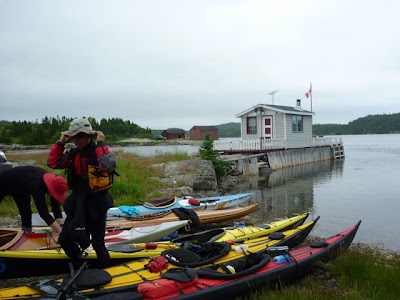 A bunch of paddlers made the short hop from St Chad's to Eastport, NL the other day and as I kayaked along I started to think about how conditions were constantly changing. Not only did the wind come on strongly only to go down to nothing as suddenly, the swell would rise and fall as we changed our position from open bay to narrow 'tickle', the name for a passage between islands here in Newfoundland, but our mood also varied from quiet to excitement and back. At the put-in, spirits were high, especially for those who were launching for the first time in Newfoundland waters. 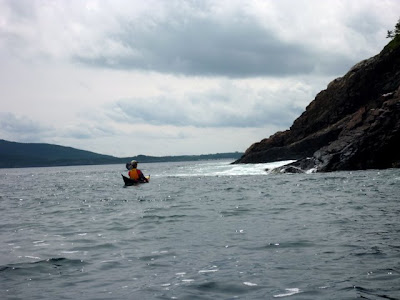 Leaving the tranquil cove of St Chad's, it wasn't long before we began to see the North Atlantic swell. Taking one's kayak in close to the rocky shore where the waters alternately pushed and sucked at the land meant our adrenalin ebbed and flowed in our veins as well. The power of the ocean was getting to us! 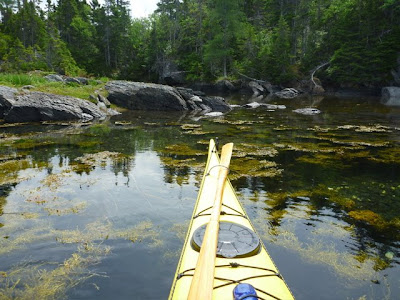 Then 'rounding the point brought us into another quiet cove touched by neither wind nor wave. The clouds parted and let the sunshine through, dappling the waters and bringing the shell covered bottom up close. A quiet time to marvel at the wonders of sea and rock and what they've done together. 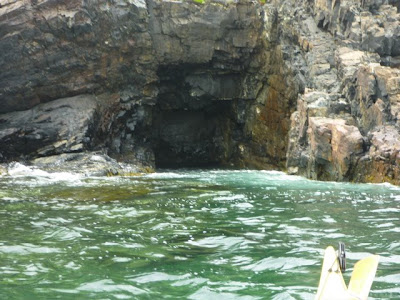 Moving on once again, a booming noise captures our attention. A small sea cave is busy trapping the swell and blasting it back towards the ocean. Once again the adrenalin surges in us. We wonder how close we dare approach the mouth of the cave. Can we enter and catch the spray or is it too dangerous? Standing to off the mouth we eventually locate a nasty sunker. It's a boat killer and we paddle on.

The thrills of coastal kayaking is often all about the pacing and how it changes from moment to moment. Just a few hours of these ups and downs makes the whole day just that much better.
Posted by Michael at 8:03 AM

Coastal kayaking is really exiting. Unfortunately we don't have any atlantic swell reaching Sweden. At the coastline of Norway it can be really nice :)

Great location Michael, I agree about the wonderful variety encountered on such trips.

Michael, as you're in the area I would recommend you have a paddle up to Bloody Point and walk up to the ancient Beothuck stone quarry. The trail is marked and the view from the top of the hill is outstanding. Rick can probably give you a bit more info on the site and area.