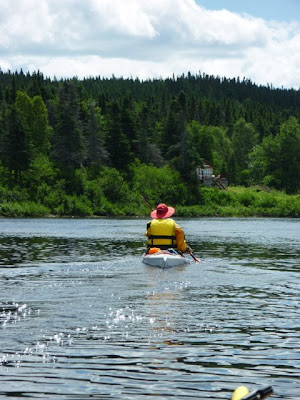 Given the remarkable coastline of Newfoundland, it's no wonder few people think about heading inland and trying out the various lakes and rivers. However there's a growing white water crowd and some rafting sites opening up which can extend one's paddling adventures well beyond the reach of salt water. 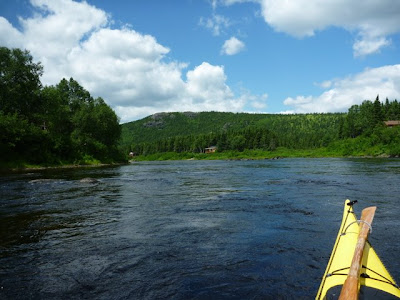 With winds gusting to a predicted 60 kph today, we decided to try out the Terra Nova River. Launching right off the Trans Canada Highway at a convenient put-in with ample parking, we headed up-stream. The water was a light coffee colour, the bottom mostly gravel beds with a few rocks here and there to keep it interesting. The first section was totally flatwater with few signs of human habitation, however things changed the further up the river we paddled.

The river continued to shoal, again mostly over salmon spawning gravel bars. Rounding a bend, we suddenly came upon cabin country! Numerous homes appeared in the bush, some of them elaborate enough to be in town, sprouting TV dishes and river-side deck furniture. 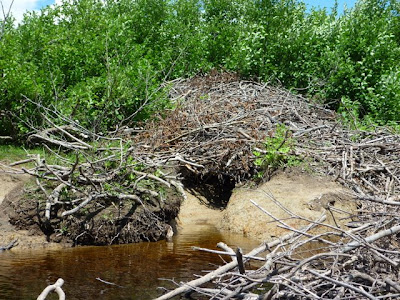 Eventually the river picked up speed and became sufficiently rock-filled to discourage us from continuing. It might have been fun to keep going, but a couple a rocks had already taken bites out of my new gelcoat, so I didn't object to pointing the bow downstream. Taking one of the cut-off channels on the return, we came across a huge beaver lodge. It was a rare chance to see their well worn entrance tunnel. Normally this feature is under water, but I suspect the changing water level in this river has forced the beavers into making multiple entrances at different heights.
Posted by Michael at 3:17 PM

Seems like you have had a good paddle trip again. :) Interesting with the beaver lodge. Thx for sharing!