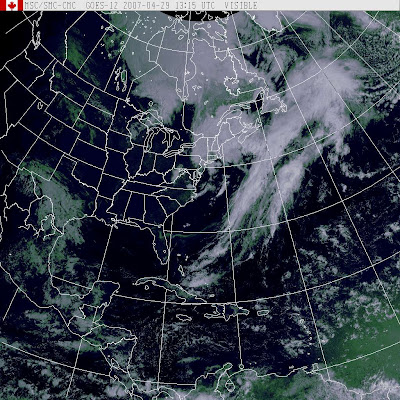 This wet, soggy, massive, nearly on the ground monster of a cloud has been sitting on my lake - and most of eastern North America - now for several days. Do I want to go paddling under it? Not really. I should be out there having fun, revelling in the waters now that the ice has left, but instead I sit here blogging. Drier, quieter, comfortable, but a bit boring. Thank heavens other bloggers are out there doing some fun things to keep me amused!

Last night I went on stage to play guitar. I almost never perform publically and last night's show was an example of why this is so. I got talked into it by friends who were raising money for the group that acts as a watch-guard for my lake. A good cause, so I agreed to perform.

I was the fourth act out. I carefully tuned the guitar during the third act and waited patiently to go on. The announcer introduced me, then mentioned that I'd been having trouble maintaining decently long finger nails all last week, but he hoped I'd be okay. I didn't need to hear that suggestion of my up-coming failure! I walked on stage, sat down and checked the tuning. It was suddenly way off! What the .....? How could that be? So, my nerves now shot, the audience wondering why I'd be tuning at this late stage, I retuned. Of course, I couldn't get it right, so forged ahead anyway with my pieces. My broken nails slid all over the strings, only vaguely hitting the intended notes. It was a less than fluid performance.

Needless to say, I left the stage a broken man. I'd never play publically again. Friends were kind. They said I was great, all that stuff, but I know, it wasn't me playing up there. Still, maybe I should try again. I've only go one direction to go at this point. Up!

On the way home, my wife began talking about an incident in the audience that went on during my performance. The couple who'd been the second act shared a kiss together while listening to me whereupon another women - his wife - suddenly erupted from across the room, stormed over, swatted the guy across the head and then left the building. Flamenco is powerful music, full of emotion and other soul-stirring stuff. Maybe I got away with more than the second act did last night. And maybe my music was better than I realised!
Posted by Michael at 11:57 AM

Been there. You shall play again, and you and the guitar will sing

Ya, but what about the other couple! LOL

You can paddle with long fingernails. So no excuse there. Stay with it, Michael. All music stirs the heart.

I don't want to belive that "Moraíto de Quebec" won't play again in a concert! Go ahead Micheal and good luck with your 2007 trip plans. Is Singapore your next stage?

Cristóbal - Singapore is on hold for now. My son moves to China sooner than expected...