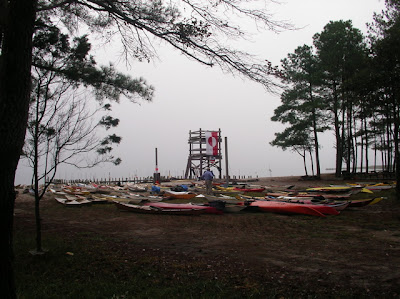 The kayaks of the clan, await.
I had several things in mind when I left to go to the Paddler's Retreat this year. First was to meet friends I'd made previously and whom I get to visit with so seldom. Second was to again work on my paddling skills, especially in my new SOF boat. The last was to film. I wanted to take some video footage which would celebrate what traditional paddling brings to people's lives, especially how it works to enhance their life experience. I especially wanted to make a film which I can share with Canadian Inuit living in northern Canada. I want people there to also feel and experience what those who go to Delmarva feel and experience.

Over the next little while I will work to edit the raw video footage I now have. I'm really excited with much of it, especially an interview with an elequent Greenlander which I filmed on the last day. I'll be posting exerpts when they're ready! 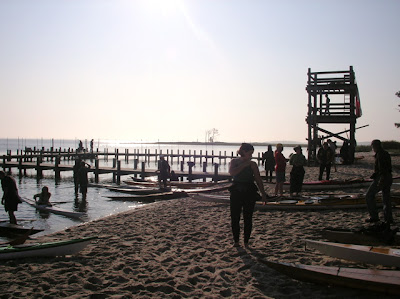 Getting ready for a day on the water. 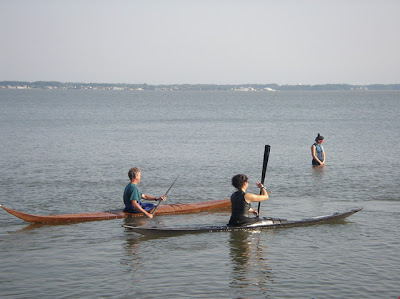 Greg and Freya paddling away from the moving ceremony held on Sunday morning.

Michael, I am seeing paddlers in short sleeves. What were the air and water temps?

Dick - The warmest Delmarva ever! Air temps were in the mid 80° F (33°C)'s and the water was warm soup. We all kept stripping more and more clothing in our attempts to stay cool and drinking more and more water to stay hydrated!

Did Freya talk about her upcoming NZ trip at all, Michael?

Kristen - We spoke of her trip briefly, but she didn't reveal much. I mentioned contacting your brother, but again, she didn't say much. I suspect this trip is still in the planning stage even at this late stage. She seems very much a person prone to 'spontaneous' decisions, although very well organized!