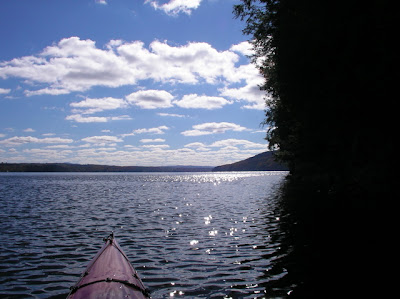 There is something about headlands. They beckon. They suck me in, pulling me onwards. I felt it strongly in Newfoundland and I felt it again yesterday. I had no particular destination as I paddled, but as I passed the point in the picture, that headland further south called to me. Naturally I headed for it. Then another and another until I came to the lake's end. A two hour paddle. With nowhere left to go, I turned about and two hours later I was back where I'd began.

Try that around these shores, and you'd end up, several months later, doing a Wendy!
Gotta be the longest left turn in Canadian waters!