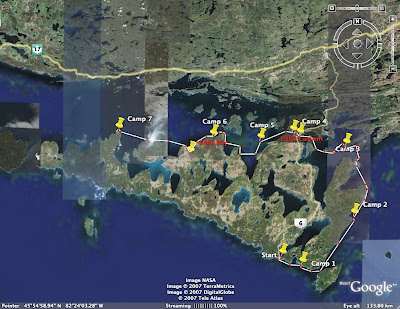 Click on map to enlarge.
Okay, I had now been paddling for a week, so where have I been? This Google map of the island gives an idea of my route, beginning in South Baymouth and working around the island in a counter-clockwise direction.

We were now within easy distance of the next lakeside town, Gore Bay, so we headed in for a re-supply stop. Arriving this time in mid-morning we were finally able to get all the things we had missed in Little Current. Heading back out soon after, we stopped for a brief lunch break and then kept right on paddling through the afternoon. The weather was sunny, warm and dead calm. Our boats cast perfect reflections of themselves on the water. We saw no people, heard no boats. Only a few deer at the water's edge saw us passing by. The fact that Manitoulin Island seemed so wild and deserted a place impressed us as it is really within a few hours drive of some major population centers.

That night we camped at Cape Robert facing the sunset. For a long time we could hear an ATV chugging along in the woods behind the beach, but it never seemed to be making any progress. Suddenly it appeared on the beach beside us driven by a young Indian man. We were all quite surprised to see each other, but after taking a moment to recover we said our hellos and he headed off down the beach. He and the lady the previous night were the only visitors we had during the whole trip.