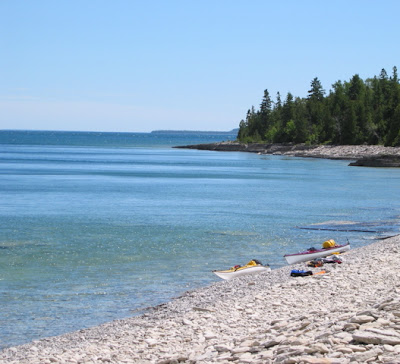 Swinging around the southeast corner of Manitoulin put the big waves directly behind our boats and they started to surf. It was here that I started to learn what the designer John Winters had been thinking when he created my QCC hull. The rounded center section allowed the boat to surf alright, but there wasn't the flat mid-sections required to leap off waves and accelerate like the Current Design boat beside me. It really took off down the wave backs, easily out-accelerating my boat. At the bottom of the trough however I had the advantage. The CD boat would bury its nose in the leading wave while the QCC, having a much fuller bow, rapidly rose up and began climbing the water up ahead. A couple of strokes allowed us to arrive at the next wave crest together, ready to head back down. 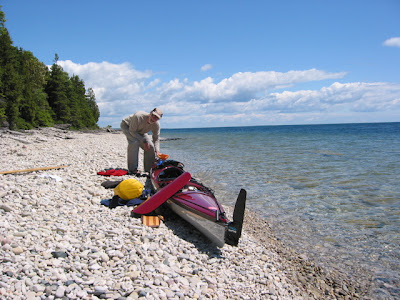 A few hours of this and we were ready to have lunch. In fact, we began losing the waves after passing through the narrows caused by an island and we headed to shore. In the picture, you can see the fist-sized rocks which composed the beach. They were nearly impossible to walk on and gave almost no purchase for hauling our heavy boats up out of the water. These beaches occur at both the east and west ends of Manitoulin and tested our back muscles every time we stopped.

The rest of the day passed quickly with a varied coastline of rising cliffs and hanging forests, all an Indian reserve where camping wasn't really permitted. The day dragged into the early evening as we paddled in search of some level ground to pitch our camp. That blessed moment arrived just as exhaustion set in. It had been a long day and I wasn't in the best of paddling form at that point in the trip having decided to use the 'paddle into shape' formula rather than its reverse (get in shape to paddle).