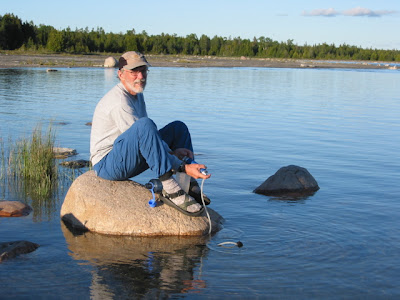 Man does not travel on food alone. Someone has to filter the water! We named this campsite 'Coyote Flats' as we had another nocturnal visitor as well as yelps in the night. The flat 'beach' in the picture's background is actually a perfectly flat stretch of limestone which extended for several acres. It could have been a paved parking lot at the local mall except it was miles from any road!

The day began pleasantly enough, but by the afternoon the rain returned along with a moderate headwind. The result was a long slog into Providence Bay where we had promised a big ice cream cone to all survivors. By the time I finally got there, I was so wet and chilled I could barely crawl up the sandy beach and into the Museum cum pizza joint for hot coffee! A change of clothes and some food soon had me feeling like a human again, but the experience did make me aware of the importance of having better clothing for extended paddling in the rain on a chilly day. Fed and warm, we launched our kayaks and turned eastward to look for a quieter spot to camp. 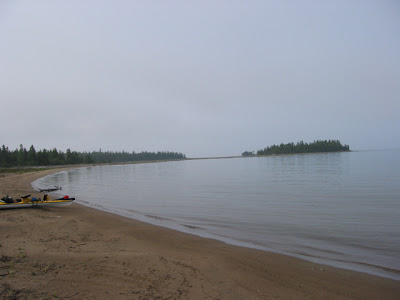 A few miles down the coast we discovered Timber Bay, a deserted, beautiful, but fragile bay with white rocky protective offshore islands and sand dunes behind the beach. The whole shore was divided into building lots which took us aback somewhat after being out in the 'wilds' for so long. We camped in lot 23 aware that our trip was nearly over. It was sad knowing that if we ever returned to Timber Bay, it would be full of houses, ATV's and the noise of civilization.