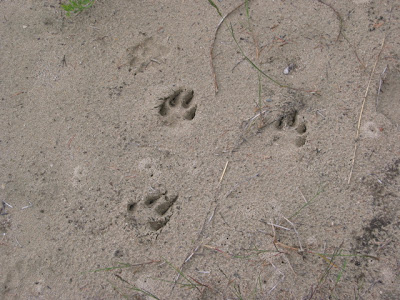 During the night and unknown to us, we'd had a visitor walk up close to our camp before suddenly changing its mind, turn and run off! A wolf? A coyote? We weren't sure, but it did give us yet another feeling of the closeness of wildness on Manitoulin Island. The previous evening an egret quietly flew overhead and began feeding in the shallows off our beached kayaks. We seemed not to be there. It returned to see us off in the morning. 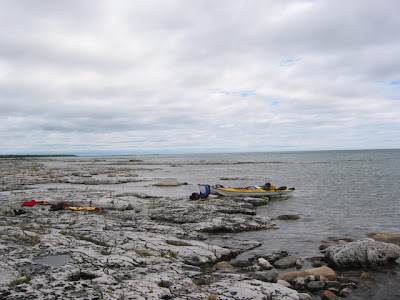 The sunshine returned as we made our way along the Huron coast. We'd previously been concerned about paddling this long exposed coast where the prevailing winds can blow strongly from offshore, building up huge wave sets. Landing sites are rare along the way, gradually changing from lumpy rocks as seen in the above picture to the only slightly friendlier mix of sand and rock seen below. 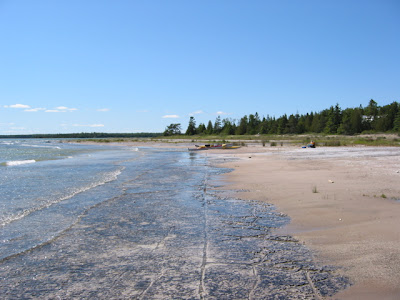 Another hazard which seemed to repeat itself over and over were shallow areas, perhaps ancient eskers, composed of boulders, which extended some distance offshore. Time and again we were forced to paddle far out into the lake to get around the breaking waves at these places. At one of them I took a chance and tried to sneak through what I thought was a deeper break. As I tried to zip through, I found my timing was off leaving me at the bottom of the wave trough rather than the top. Scrambling out of the sudden 'hole', my Greenland paddle hit a rock and the tip broke off. 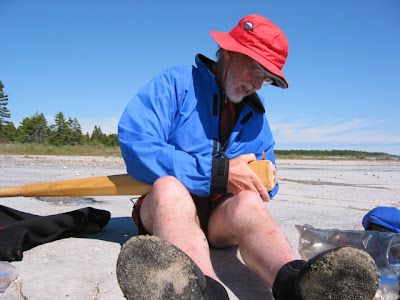 Later when we landed on one of the few partly sandy beaches for a break, I was able to carve a new tip, one of the advantages of making one's own wooden paddles!

That night coyotes were heard yelping inland and more tracks were found near the tent in the morning.