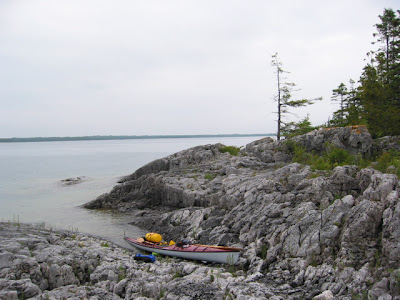 It wasn't easy paddling out of Timber Bay on this last day. It had made a deep impression on me as one of those 'special places' one encounters from time to time. The day was overcast, but calm. The high winds and giant waves we'd feared along this coast never materialized. The 'protected' North Channel had been a much tougher paddle by far. As we paddled eastward, increasingly the whole experience became more and more 'civilized'. We began to see houses, hear cars and feel motor boat wakes. 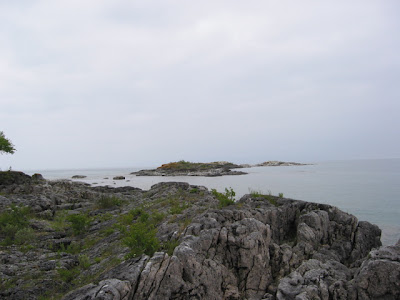 One of the places we visited I'd actually wondered about before the trip began. It was called Michael's Point. Naturally, I was interested to see what this area was like. Was it like me? In the days leading up to visiting it, the point had been taken on the status of a 'Place of Power' for me. It was assumed that I would have magical powers and cosmic secrets would be revealed to me. Instead, I felt a sense of loss while I was there. Was it a loss because the trip would end later that day? Was it a loss because I felt something had happened, perhaps to my uncle who'd not been well when I left on the trip?

We pushed off on the last leg after having lunch on the point and by late afternoon I nearly capsized just off the ferry dock in South Baymouth as I leaned over for a celebratory hug! The folks on the ferry dock found it quite entertaining. 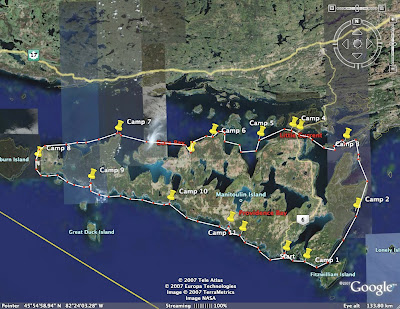 Click on map to enlarge
When I arrived home a few days later, I learned that my father had died during the first week of the trip. In fact, it happened the day after my only phone call home. Perhaps this connection with Manitoulin Island will always stay with me. It seemed to be a very spiritual place, somehow fitting he would go while I was there communing.

I appreciate that you do have somewhere meaningful to connect with your dad, Michael. And he probably would too.

thats a sad return from a trip but kirstens words are very true.