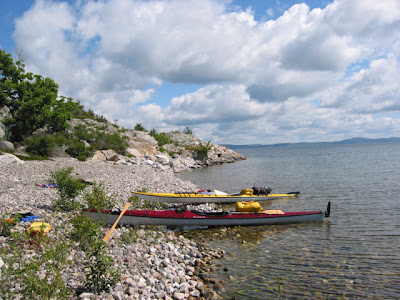 Slipping through the Hole in the Wall the next morning we ran bang into a strong head wind which hammered our boats all morning as we crossed over to Heywood Island. Once again we were dragging our boats up cobble beaches. After a brief break, we chose to paddle around the leeward side of the island as we made our way towards Little Current, the first of two re-supply points on the trip. 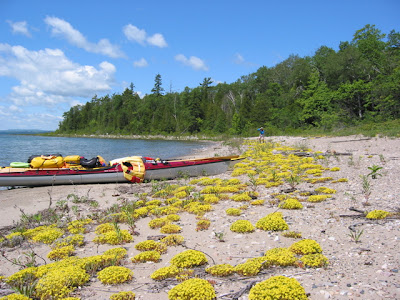 It was on the east side of Haywood that we encountered one of several little miracles that occurred during the trip. We found a bright neon coloured pool noodle lying on the beach, just the thing for saving our hulls from their inevitable fate! We cut it up and rolled up the beaches scratch-free from then on.

The remainder of the day became a race into the wind. We wanted to hit the stores in Little Current before they closed. As it happened, we made the grocery store, but nothing else of interest. We might have made a few more, but the high dock walls everywhere in town, designed for the power-boat crowd, prevented us from landing. After searching for a while, we finally found a sailboat slip where a kind lady agreed to watch over our kayaks while we were in town.

Thwarted by our shopping venture, we headed westwards through the narrows and camped for the night near the ruins of an old mill on Picnic Island. While it was a quiet spot to camp, we soon discovered the place was also covered, like many parts of Manitoulin, with poison ivy! We walked around with care!