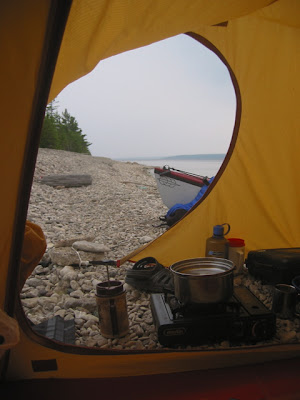 Waking up, we found the weather had changed. Gone were the calm seas and sunny skies. It was overcast and foggy. By the time we'd packed away breakfast and broken camp and launched the kayaks, it had begun to rain and it continued for most of the day.

Rounding the point in the top picture we discovered we'd camp nearly on top of a huge quarry operation! Limestone was being crushed and poured into huge laker ships for transport to who-knows-where. We were totally taken aback as we'd had little clue such an enterprise was so close to us. It all seemed so un-natural after our week of virtually wilderness tripping. Paddling past the slab-sided laker, we headed a few more kilometers down the shore to the lighthouse where we'd promised ourselves a shore-side meal, our first since launching. 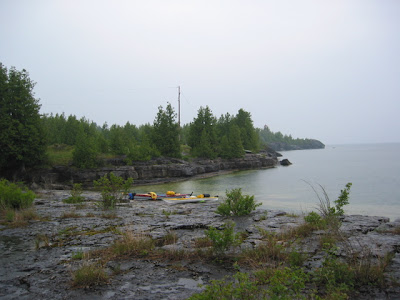 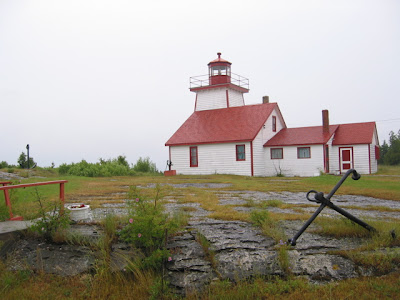 Landing just below it, the shores once again made of flat shelves of limestone, we made our way upwards where we had an early lunch. Asked whether we had peddled in to the place we said "No", we'd paddled. The reply was, "Had we peddled far in the rain?" Again, we replied, "No, we'd just paddled around the corner." The waitress now totally confused, retreated to get our order. It was clear kayakers were not regular visitors in the area! 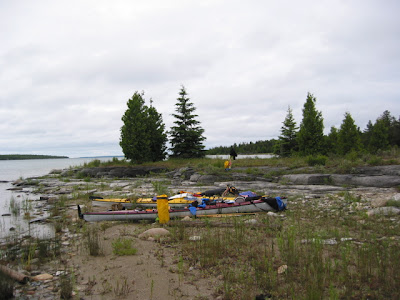 The afternoon found us paddling in a mysterious world of rain and mists, where eagles and ravens called out to us from overhead and along the shores. None of the coastline seemed to be in the right place due to the flatness of the shore. This was exaggerated by the fact that Lake Huron's water level had dropped about 6 feet since our charts had been made and thus whole bays had disappeared and new islands had risen from the depths. Fortunately east was still east, so we kept Manitoulin on our left and paddled on, eventually coming to Burnt Harbour where we camped for the night.

I like the vestibule area of your tent. It seems very functional. What kind of tent is that?

Acute onset of reality with the quarry. Enjoyed the trip account and love the tent shot.

Susanita - The tent wasn't mine and I'm afraid I don't recall the brand. It was handy however!

great trip journal,
I particularly identify with the rainy bits. . . .