When we awoke on Day 5, there was silence. Not a breath of wind. Without wasting a moment we loaded up the kayaks and headed westward on still, calm water. What a relief to be paddling on smooth water again. We still ached from the previous day's hard push to Little Current.

By mid morning however, the wind was back. We made it to tiny Wabos Island, some rocks and a few trees and bushes was all it really was. The wind was back with a vengence. As we ate our lunch, we watched the waves build and build. It was obvious that this tiny outcrop was going to be home for the night. Find a place to camp wasn't easy. There was hardly a inch of level ground that wasn't covered with poison ivy or crags of broken limestone.

The next morning the wind had dropped somewhat, but the huge waves continued to roll by the tiny island. Feeling we were now experienced in the waves, we shoved off, heading southward into a big bay. We figured as we got down into it the wind and wave height would drop and we'd be able to take advantage of the shorter reach to turn westwards again. We did just that and finally reached the western side of the bay mid afternoon. It seemed too early to stop so we rounded the point and began looking for a spot to stop along the shore further westward. We were again facing the huge waves and some islands marked on the chart were completely awash beneath them! Staying within sight of each other wasn't easy either as, at times, our kayaks would be invisible in the waves. 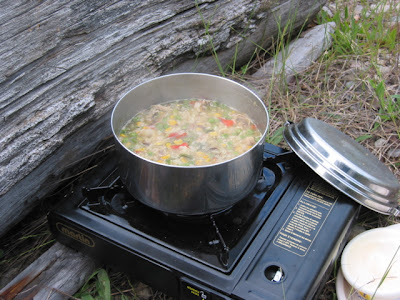 We finally found a spot to camp after checking several rocky coves. Supper never tasted so good as it did that night! I used a compact butane stove on the trip. It's advantage was its instant-on feature allowing meals to be ready quickly without much fuss. Definitely an advantage after a long, tiring day of paddling!

We'd no sooner settled into the tent when a four-wheeler appeared out of the woods. It turned out to be a friendly neighbour curious about who had arrived next door! Thank heavens. We couldn't have faced those waves another minute had we been forced out into them.