We pushed off again the following day, the start of the second week of paddling. It was almost a repeat of the day before as far as paddling conditions went. At times we followed the coast when it looked interesting, but mostly it was low rocky beaches backed by dense forests. There were no houses or other signs of human presence. Manitoulin Island, it turns out, is a place of interior villages and farms. Only in a few places have people begun to build on the shore lines. One tower built of rocks attracted our attention at the mouth of a bay, but shallow water prevented a close inspection of its purpose. 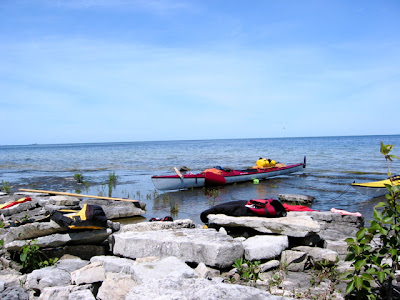 As the day passed, we headed offshore to explore some smaller islands along the way. In the picture above, on Vidal Island, we had lunch. Note the use of the pool noodle under my kayak protecting it from the nearly submerged rocky shore! On the island in the photo below, there were two bird rookeries, one for gulls and another for cormorants which built nets looking like 10 gallon pails made of twigs. All in all, it was a noisy, smelly place with very unfriendly shores composed mostly of gelcoat munching fragmented boulders. Perhaps that's why the birds found it so attractive! 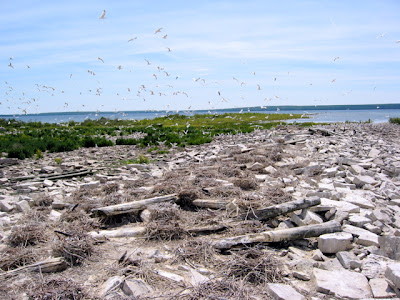 Heading onward once again, we pointed our bows for the last cape, the one that led around the western corner of Manitoulin into Missassagi Strait. Once more the cobble stone beaches returned, this time higher and steeper than ever! A few fishermen were doing their thing in power boats out in the strait. When we decided to bathe in the chilly waters, the fishermen suddenly decided to try their luck closer to shore, but it didn't seem to improve the fishing no matter how close they got!

I thought you might be interested to know that I am in your old stomping grounds this week; if I remember correctly. I am posting photos of Kangirsuk until tomorrow.