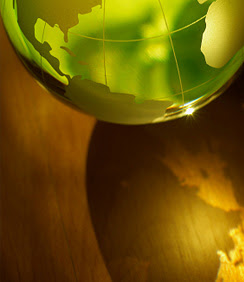 I've joined the Blog Action Day group today to blog about their chosen topic, the environment. One of the reasons I thought this would be a good idea came as a result of some things which have been happening to my neighbours. I'll deal with each one at a time.

For years we have bought turkeys from a small local producer. We chose this farm because it raises its birds in a natural fashion, feeding the birds food which doesn't have to be laced with anti-biotics and keeping them in a place where they can forage by walking around. The government has recently tried to put them out of business. Why? Because they don't conform to their regulations designed for the huge factory style producers who house their birds in confined spaces and feed them trash food.

Another neighbour produces goat cheese from their own small herd. This small operation has also been forced to curtail its operation to the point where they cannot make even a modest profit. Again this operation doesn't have the thousands of dollars it would cost for them to meet the government regulations put in place to make the giant milk and cheese operations safe for the public.

Finally a local dairy producer has also stopped producing. Why? Again, because he is too small to afford the constant upgrades in costs to meet ever changing regulations in place to protect the food supply coming from the giants.

All three producers have been told the changes they have been asked to make are for the public benefit. Simply speaking, the regulations are supposed to reduce the chances of disease being spread. Disease? The fact is that there have been no incidences of illness being spread by these producers or similar small operations. What is really happening is the big producers don't like competition from the small speciality farmers who grow a better product and who maintain a diverse gene pool. Big producers tend not produce food in an environmentally sound fashion in many instances. They usually grow in mono-culture lots, to produce not for taste, but for transport and shelf-life, they lace their produce with a chemical soup designed for factory style farming and they produce waste products which foul our streams and fields. Do the regulators care about this? Generally they don't. It usually takes a crisis to wake them up to their short-sightedness and foolishness. Clean-up tends to be superficial and designed mostly to quieten the outraged public.

Our wild places are being over-run by our foolishness. Even a high school biology course will alert one to the dangers of these practices, yet we allow it to persist in our environment. We do it to our peril. Don't let the traffic circle be our only wilderness!

So my environmental plea today is to become an informed consumer. Buy your food locally, pay attention to how it was produced and support farmers who care about the sustainability of their farm practices. Finally, a good book to read on this topic is by Barbara Kingsolver. It's called Animal, Vegetable, Miracle. I highly recommend it!

Lower photo from the site The Big Wild.

Reminds me of stories I've heard about an NYC raw milk black market, or the constant dance that NYC's makers of fresh mozzarella are doing with the health inspectors.

Mozzarella dancing? I could get into that. I love pizza! ;-)