It's Not Pink, Okay? 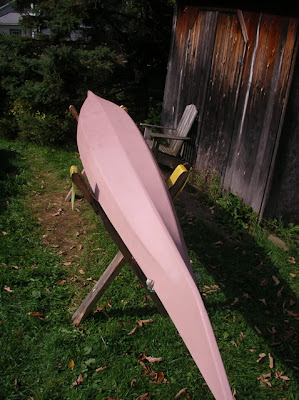 I've been busy painting the re-skinned SOF this week. I began with white, but have now switched to a brown tint. I wanted the skin to look white on the inside and dark brown on the outside, which is why I began with white. In the picture here, the boat looks pink, but that's just an illusion caused by my poor photographic skills. Actually the colour is New-born Walrus Brown or what is called, for some bizarre reason here in southern Canada Industrial Brown. It's clear the paint manufacturers haven't much imagination when it comes to paint colour names...

I should get at least 3 coats on the hull before leaving for Delmarva and 2 coats on the deck. That ought to keep me dry while paddling, but I'll probably put some more coats on when I return next week as I like to have a smoother finish than the 3 coats provide.

So, I'm off early tomorrow morning, driving south to Delaware. I will return early next week. Take care of yourselves while I'm gone!

Hey, Michael:
The SOF looks great - real nice hull, reminds me of a VK :->))
Hope you have a great time at Delmarva - throw in a roll or two for us. That's one consolation for all you poor folks living on the Mainland - you can just get in a car and go anywhere on the continent, while we Newfoundlanders get fined $1000 (by Marine Atlantic) every time we leave paradise and return.

Have a safe and wonderful time.,,and don't fret over the color. It's okay to show your feminine side :)

Looks pink to me. A lovely pink.

nothing wrong with pink!

Yeah. Looks pint to me, too. Must be one of those women-specific boats.